This is a follow up on my last semantics and brain entry concerning modality/language-specificity.

Word-level semantic deficits in aphasia -- usually defined in terms of comprehension errors dominated by semantic confusions -- have been found in some patients to be specific to the auditory-verbal modality, and in other patients to extend at least to the visual modality as well. I would have predicted that the modality specific deficits would be associated with lesion in the posterior temporal lobe (~MTG). This seems not to be the case, however. 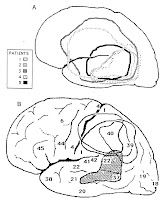 suggest that more general semantic deficits -- affecting single word processing as well as non-verbal object processing -- are associated with the posterior temporal lobe. The image on the left is from Chetkow et al. and shows, in the top panel, 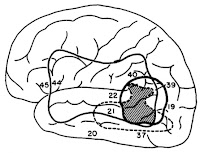 the outline of lesions from their group of 8 aphasics with verbal+non-verbal semantic deficits, and, in the bottom panel the region of overlap of these lesions (shaded). The image on the right is from Hart & Gordon, and shows the lesion outlines and region of overlap (shaded) of their 3 patients with semantic deficits. Although these are not fancy voxel-based lesion-symptom mapping studies, the similarity of findings in the two studies makes me think there is something to the anatomical findings. Patients with language-specific semantic deficits had this posterior temporal region completely spared; their lesions were all (n=3) in the parietal lobe (lesion outlines of these patients are in the bottom panel of the Chertkow et al. figure on left).

1. The posterior temporal lobe is involved in semantic processing at the word/object level. The lesion evidence is quite clear on this point. We can infer this from Wernicke aphasics who tend to have lesions in the posterior temporal lobe, and typically present with semantic deficits, and now we see it explicitly in two studies of patients with word/object level semantic deficits.

2. Patients with semantic deficits and posterior temporal lesions tend to have deficits that are not linguistic-specific. Does this mean that the deficits are amodal, affecting the representation of semantic knowledge? Not necessarily. It is possible that this region contains distinct networks for accessing semantic knowledge from the auditory-verbal modality on the one hand, and from the visual modality on the other. That is, the general semantic deficit could result from anatomical proximity of largely independent system. Or it could be that there is a single system that accesses semantic knowledge, that can take input from either the visual or auditory-verbal modalities. Evidence for an access, as opposed to a knowledge representation deficit comes from the fact that semantic errors in aphasia tend to be unstable: patients may make an error on a particular item on one trial, and then get it right the next time they are presented with it. Both of these possibilities are consistent with our proposal that the posterior temporal lobe (MTG region) supports the mapping between sound and meaning, or in more psycholinguistic terms, functions as a "lexical interface." Note that if this network also turns out to support mappings between visual percepts and meaning, it does not disprove our claim, it only means that the region's function is more general than a pure sound-to-meaning mapping system.

I should think that examining cases of pure word deafness would help clarify this question.