Semantics and Brain - more on the ATL as a hub

Here's a figure from the Patterson et al. reading which depicts the two views of the neural organization of semantic memory as conceptualized by the authors: 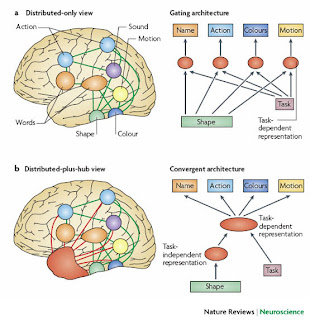 The top panel is the "distributed-only" view in which conceptual bits are widely distributed, are stored in sensory and motor areas relevant to the concept, and are bound together via connections between the various areas. The point is that there is no single area coordinating the linkages between these conceptual bits. The bottom panel is their alternative, "distributed plus hub" view, which also holds that conceptual bits are widely distributed in sensory-motor areas, BUT that the linkages area coordinated by a single "hub" living in the ATL.

To put my cards on the table, I kind of like the hub idea with respect to the ATL (I don't like it w.r.t. the planum temporale though -- future post). Like I said before, I'm not convinced yet that the evidence is all that strong, but I like the idea nonetheless. Here's something to think about though:

Suppose the evidence does pan out that the ATL is critically involved in the semantic deficits found in semantic dementia. Can we conclude that the architecture in the bottom panel of the above figure is correct? Not necessarily, as pointed out in our class by Mary Louise Kean. Just because a single region is implicated in some function, doesn't mean that computationally that region as a whole performs a single computation function. For example, it could be that the ATL contains parallel circuits (convergence zones, say) each performing a similar integrative function but across their own idiosyncratic domains. The parallel circuits in the basal ganglia are a model for this kind of architecture.
Posted by Greg Hickok at 1:31 PM