This week we read over a bunch of papers looking at the distribution of atrophy and metabolic changes in semantic dementia, as well as correlation of these measures with semantic and naming tasks. Our goal was to determine whether the semantic deficits in this syndrome can be linked to ATL dysfunction, as some have claimed. As Patterson et al. (2007, NRN, 8:976-88) put it, the strength of this view "...hinges, however, on claims about the relatively focal nature of the pathology in SD." p. 980.

So how focal is it? Not so focal. Here's a few quotes and info from the papers we read this week:

Correlational analyses are any more focal:

The paper by Williams et al. (2005, NeuroImage, 24:1042-51) which included SD patients as well as the frontal variant FTD patients and correlated semantic scores across all patients, reports, "The analysis of correlation with the semantic test scores yielded extensive cluster in the left temporal lobe that included temporal pole... parahippocampal gyrus and fusiform gyrus ... superior and middle temporal gyrus... and inferior temporo-occipital region." p. 1046 (see figure below) 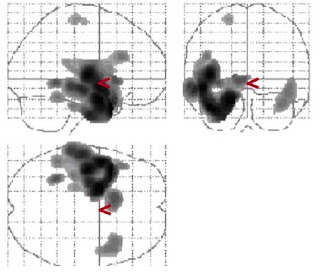 And Galton et al. (2001, same as above) report correlations between semantic tasks and volume measurements in the left fusiform.

Conclusion: data from semantic dementia does not conclusively implicate the ATL, unless by "ATL" one is willing to include minimally (e.g., see Nestor et al. 2006, NeuroImage, 30:1010-20 for the most "focal" results of all the papers we've read), limbic structures in the medial temporal lobe (hippocampus and surrounding cortices), and ventro-lateral temporal lobe structures extending (on the left) posteriorly to include about half the entire temporal lobe.
Posted by Greg Hickok at 3:05 PM