How do we perceive speech after 150 kisses?

I wouldn't know, but Marc Sato does. Marc tells me this was a tentative title for a poster he presented at SfN (or was it at NLC?). In any case the official title was Use-induced motor plasticity affects speech perception.

Rather than using that clumsy TMS technique, Marc and his colleagues decided to target speech-related motor systems using the CNS equivalent of a smart bomb: simply ask participants to make 150 lip or tongue movement over a 10 minute span. The idea is that this will fatigue the system and produce a kind of motor after effect in lip or tongue areas. Perception of lip- or tongue-related speech sounds (/pa/ and /ta/) can then be assessed behavioral. They used syllable discrimination (same-different) both with and without noise.

They calculated d' and beta scores. (WOOHOO!) d' of course is a measure of discrimination performance, corrected for response bias. Beta is a measure of the bias -- specifically, the threshold that a subject is using for deciding that the stimuli are, in this case, same or different.

So what did they find? Fatiguing lip or tongue motor systems had no effect on discrimination (d', top graph) but did have significant effector-specific effects on bias (beta scores, bottom graph). 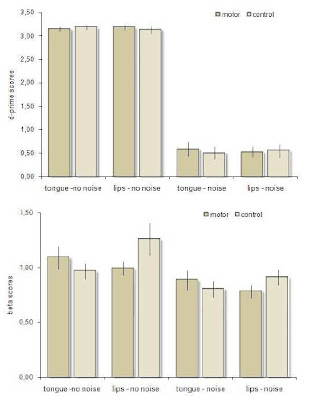 Compared to the control task, both the tongue and lip motor training biased participants’ response, but in opposite directions. These results are consistent with those observed by Meister et al. (2007, Current Biology) and d’Ausilio et al. (2009, Current Biology), obtained by temporarily disrupting the activity of the motor system through transcranial magnetic stimulation.

I don't think the argument is complete. One needs to show that a similar "acoustic stimulation" - thru the presentation of repeated 'ba' versus 'da' acoustic tokens does affect perception beyond biasing.

If we get the same effects with acoustic stimulation (i.e., biasing effects, and no "perception effects"), then we are none-the-wiser about any "real" speech-perception mechanisms in my opinion.

More precisely, I think I agree with this conclusion: "motor stimulation/fatigue has no effect on acoustic perception"

But, it is still not a complete argument against early motor contribution to speech perception, unless the parallel acoustic task is run.