THE NEW PHONEBOOK IS HERE! 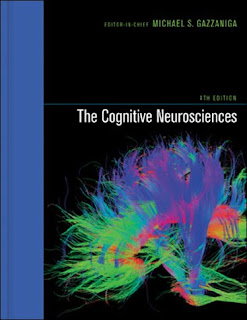 Cognitive neuroscience's equivalent, that is... Gazzaniga's The Cognitive Neurosciences IV arrived in my mailbox a couple of weeks ago. I own Vol. I & II, never bothered to get III and now have IV because I've got a chapter in it for the first time. I guess that means I'm officially a cognitive neuroscientist.

My chapter notwithstanding, the volume is pretty impressive and contains a lot of useful papers. It is again divided into the usual sections, Development and Evolution, Plasticity, Attention, Sensation and Perception (with a whopping three auditory chapters, including one by new UCI Cog Sci faculty member, Virginia Richards), Motor Systems, Memory, Language (the section I'm least likely to read), Emotional and Social Brain, Higher Cognitive Functions (i.e., everything else, including two chapters on neuroeconomics), and Consciousness (i.e., stuff we REALLY don't understand). An 11th section is titled "Perspectives" and features, well, perspectives by senior investigators. I'm looking forward to reading Sheila Blumstein's chapter in this section.

The only chapter I've already read is Tim Griffiths and Co.'s piece on auditory objects. There is some useful information there, including what appears to be a new study on auditory sequence processing using fractal pitch stimuli (sounds cool anyway). Way too much discussion on dynamic causal modeling though which includes two large figures and three tables -- TMI Tim :-)

There are a number of papers that I will eventually read. Some on the top of my list include motor-related papers by Reza Shadmehr John Krakauer (Computational Neuroanatomy of Voluntary Motor Control) and by Grant Mulliken and Richard Andersen (Forward Models and State Estimation in Posterior Parietal Cortex). There's sure to be some information there that is relevant to speech.

The volume is definitely worth a look.
Posted by Greg Hickok at 2:40 PM