I fully agree with Dorte Hessler's assessment that left hemisphere damage can produce significant "problems to identify or discriminate speech sounds in the absence of hearing deficits." But here is the critical point that David and I have been harping on since 2000: the ability to explicitly identify or discriminate speech sounds (e.g., say whether /ba/ & /pa/ are the same or different) on the one hand, and the ability to implicitly discriminate speech sounds (e.e., recognize that bear refers to a forrest animal while pear is a kind of fruit) on the other hand, are two different things. While it is a priori reasonable to try to study speech sound perception by "isolating" that process in a syllable discrimination task (ba-pa, same or different?), it turns out that by doing so, we end up measuring something completely different from normal speech sound processing as it is used in everyday auditory comprehension. Given that our goal is to understand how speech is processed in ecologically valid situations -- no one claims to be studying the neural basis of the ability to make same-different judgments about nonsense syllables; they claim to be studying "speech perception" -- it follows that syllable discrimination tasks are invalid measures of speech sound processing. I believe the use of syllable discrimination tasks in speech research has impeded progress in understanding its neural basis. 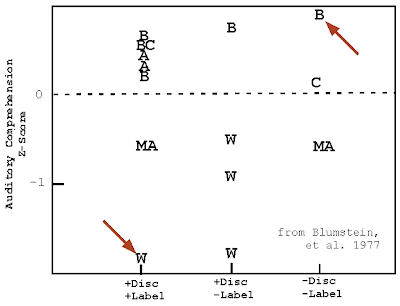 Where are the lesions that are producing the deficits on syllable discrimination versus auditory comprehension? According to Basso et al, syllable discrimination deficits are most strongly associated with non-fluent aphasia, which is most strongly associated with frontal lesions. According to a more recent study by Caplan et al., the inferior parietal lobe is also a critical site. Notice that these regions have also been implicated in sensory-motor aspects of speech, including verbal working memory. This contrasts with work on the neural basis of auditory comprehension deficits (e.g., Bates et al.) which implicates the posterior temporal lobe (STG/MTG). 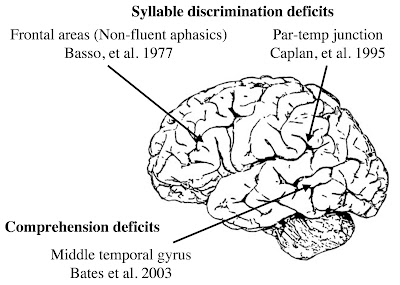 Some case study contrasts from Caplan et al. underline the point. On the left is a patient who has a lesion in the inferior frontal lobe and who was classified as a Broca's aphasic. On the right, a patient with a temporal lobe lesion and a classification of Wernicke's aphasia. By definition, the Broca's patient will have better auditory comprehension than the Wernicke's patient. Yet look at the syllable discrimination scores of these patients. The Broca case is performing at 72% correct, whereas the Wernicke is at 90%. Again, the patient with better comprehension is performing poorly on syllable discrimination showing that syllable discrimination isn't measuring normal speech sound processing. 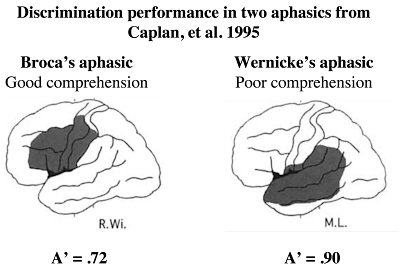 It is hard for us to give up syllable discrimination as our bread and butter task in speech research. It seem so rigorous and controlled. But the empirical facts show that it doesn't work. In the neuroscience branch of speech research, the task produces invalid and misleading results (if our goal is to understand speech perception under ecologically valid listening conditions). It's time to move on.