What is driving the complexity effect? Presumably it is some form of working memory. In the case of OR sentences, you have to hold two items in memory -- the man, the boy -- before you get to the verb that tells you the role these items will play in the sentence. In SR sentences, you only have one item in memory -- the man -- before you encounter the verb which establishes the role of the noun phrase.

I like Caplan et al. study, but it doesn't convince me fully that at least part of the complexity effect isn't due to phonological working memory. For one thing, they used written stimuli, and I'm never convinced that reading generalizes to auditory comprehension -- my primary interest. For another thing, the activation focus in Broca's area was very anterior, likely in the pars triangularis/BA45, not in the pars opercularis/BA44 which is more likely a site involved in articulatory rehearsal. Maybe a good chunk of the suppression effect in "Broca's area" -- usually defined as the combination of the two areas noted above -- IS driven by plain old articulatory rehearsal. 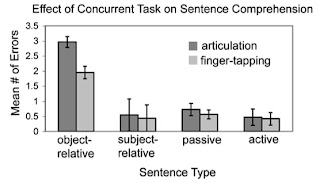 What is the role of Broca's area in these effects? We used fMRI to find out. Subjects listened to SR or OR sentences and made semantic plausibility judgments about them during articulatory suppression, finger tapping, or without any secondary task. We also mapped the activation patterns associated with the secondary tasks alone. Without any concurrent task, we found a robust sentence complexity effect in Broca's area, that included both the pars triangularis and pars opercularis:

During articulatory suppression, much of the complexity effect disappeared, leaving only a focus in the pars triangularis similar to Caplan et al.'s finding:

This pars opercularis focus, but not the triangularis focus, was also strongly activated by the articulatory suppression task alone, indicating that this more posterior portion of Broca's region is the IFG correlate of articulatory rehearsal, as previous work has indicated.

So what does all this mean? First, we can conclude that plain old, domain-general articulatory rehearsal contributes to sentence comprehension under high load conditions (i.e., OR sentences), and at least part of the sentence complexity effect in Broca's area is attributable solely to articulatory rehearsal, namely the pars opercularis part. Second, we replicated Caplan's result showing that a portion of Broca's area, the pars triangularis, persists in showing a sentence complexity effect even during articulatory suppression. However, this effect was eliminated during concurrent finger tapping, possibly arguing against a syntactic specific interpretation of the sentence complexity effect in the pars-T. Oddly though, finger tapping alone didn't activate the pars-T, it just reduced the amplitude of the response to the OR sentences (without an obvious drop in behavioral performance). So the story on the pars opercularis seems clear: it supports articulatory rehearsal, which in turn supports the processing of high load sentences. But the story on Mr. T is mysterious. We're open to suggestions.