The human mirror system is not selective for action perception: Evidence from Iacoboni et al. 1999 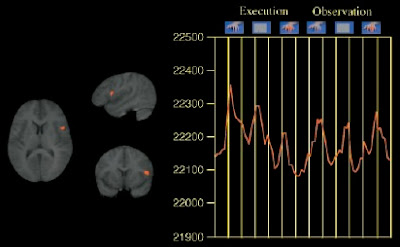 Iacoboni et al. (1999, Cortical mechanisms of human imitation, Science, 286:2526-8) can probably be considered a "classic" paper in the mirror neuron literature. Certainly, it has been highly influential, being cited over 700 times so far. The paper is a good one, and demonstrates quite clearly that the perception and execution of action both activate the left inferior frontal cortex.

The main result is that imitating viewed actions results in more activation in the left inferior frontal gyrus (a portion of Broca's area) than making those same movements when cued by non-actions. You can see this in the time course data above: the three left most peaks of activation correspond, respectively, to the action imitation condition (largest peak), the grey rectangle with dots condition, and the symbols on static hands condition. Nice result.

What's also interesting, though, is the pattern of activation for the observe-only condition which is shown in the right half of the time course. Again, the three peaks correspond to the three conditions, moving hand, rectangle, static symbol hand. There's no difference in the magnitude of activation across these three conditions! What business does a grey rectangle with dots on it have activating the action understanding/imitation system?! And just as robustly as viewing actions themselves! Is Broca's area the neural basis of grey-rectangle-with-dots-on-it understanding? Or grey-rectangle imitation?

Homework question: What's driving this non-action response?
Posted by Greg Hickok at 9:26 AM