Role of the anterior temporal lobe in semantic word retrieval

Lesion studies are making a come back and this is a good thing. fMRI is a good and valuable technique, but it absolutely needs to be balanced with other methods and lesion studies remain important in this respect.

A new lesion study from Myrna Schwartz' group has recently appeared in the advance access section of the journal Brain. The study examines semantic word retrieval in aphasia using a picture naming task. For years this group has been doing fantastic psycholinguistically informed modeling work (with Gary Dell) on naming errors in aphasia and now adds lesion correlation to their arsenal. Using voxel-based lesion symptom mapping (VLSM) in a sample of 64 aphasics, the authors correlated semantic error rate in naming (misnaming elephant as zebra) with the presence or absence of lesion on a voxel-by-voxel basis. They also administered control tasks, one set that sought to identify non-verbal semantic comprehension deficits (Pyramid and Palms & Camel and Catus Tests) and another that sought to identify verbal comprehension (a word-to-picture matching test & a synonym judgment test). The non-verbal control is the most important because it rules out deficits caused by visual analysis of pictured stimuli and general conceptual semantic processes. 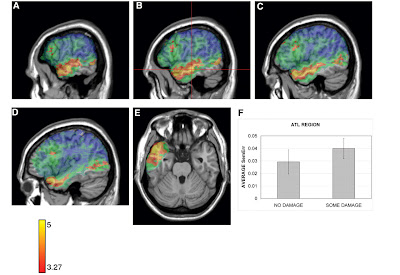 Factoring out the verbal comprehension measures didn't change the pattern, however, factoring out the non-verbal semantic tests eliminated the frontal and posterior temporal foci, leaving only the anterior temporal regions as significantly correlated with deficits in accessing word- (lemma) level information (see figure below). 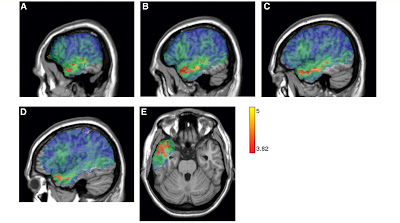 A couple of surprising things came out of this study, for me anyway. One is that the anterior temporal focus remained significant even after factoring out performance on non-verbal semantic tests like the Pyramid and Palms Test. Patients with semantic dementia have ATL involvement, do poorly on the PPT, and have been argued to have amodal semantic deficits. I would have predicted that factoring out the PPT would result in only a posterior temporal focus surviving, but the reverse held. This is interesting and useful information.

All in all, this is an important study that will have to be taken seriously by anyone developing models of the functional anatomy of language.

This is a fascinating paper. I'm particularly intrigued that factoring out verbal comprehension scores had little effect, but factoring out non-verbal comprehension scores did. What do the P&P and C&C tests have that the Peabody Picture Vocabulary Test doesn't? I've never used the PPV, but doesn't it also involve 'visual analysis of pictured stimuli and general conceptual semantic processes'. Does it include close semantic distractors?