A speech-related sensory-motor integration network is useful for lots of things: auditory feedback control of speech production, producing multisyllabic words, enabling motor-to-sensory modulation of speech perception, phonological short-term memory. In addition to these, I have suggested previously that such a circuit, which includes area Spt at the posterior parietal-temporal junction, also supports new vocabulary development:

Auditory–motor processes at the level of sequences of segments would be involved in the acquisition of new vocabulary… (Hickok & Poeppel 2007, p. 399)

I never had much evidence to support this supposition and hadn't yet done the experiments, so when I came across a 2009 paper by Paulesu and colleagues claiming to have identified a system for new word learning, I was excited. After glancing at the paradigm and scanning the figures I was positively stoked -- Spt was lit up like a Las Vegas billboard (red blob in the crosshair). 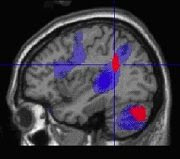 Here's what they did. Two PET experiments each involving six subjects. In the first experiment subjects listened to lists of non-words, lists of words, or rested. During the list scans they were asked to learn the non-words/words. The same set of items was presented in each of 5 learning scans. Learning was assessed via free recall after each scan. Experiment 2 was similar but instead of learning a list, they learned word or non-word pairs and learning was assessed by presenting one the pair and asking the subject to recall its associate. Not much came out differently in the two tasks so that manipulation will be ignored here.

The main effect of learning relative to rest involved lots of brain areas (blue in image above) including auditory regions (they were listened to speech) and frontal parietal networks (they were trying to remember the items). Nothing exciting here. The interesting contrast was between words and non-words. Non-words of course place much more burden on the "phonological" system and so should highlight regions involved in the acquisition of new phonological forms. This contrast (non-words minus words) produced activation in Spt (temporo-parietal junction), Broca's area, and some other sites.

So Spt activates for the learning of new phonological word forms. That's what I would (did) predict. Why then am I disappointed with the study? The authors pointed out that the regions that were active were basically the same as those regions previously found active in phonological working memory tasks, and that this overlap "establishes an explicit anatomical link between these two aspects of human cognition" (p. 1375). Even though I think there is a link (albeit to a sensory-motor integration circuit rather than to a "phonological short-term memory" system) their study doesn't make the connection. The reason is that their findings can be explained purely in terms of phonological working memory. During non-word as well as word learning subjects probably rehearsed the lists they were hearing thus activating their phonological working memory system. The phonological load was greater in the non-word condition so you get more activity during rehearsal of non-words than words. So phonological word form learning overlaps phonological short-term memory systems because their learning task likely induced phonological rehearsal. Again I don't doubt their conclusions, it's just that the reasoning is circular. A better test would have been to correlate brain activity with learning (recall scores).

To be fair, they did look at learning effects in terms of changes in brain activity as a function of learning scan. They didn't find a significant difference in Spt or Broca's region however, apparently subjects were rehearsing every scan. They did find an interesting effect in the mid-anterior STS/MTG though, where activity decreased as a function of learning scan, mostly for non-words. 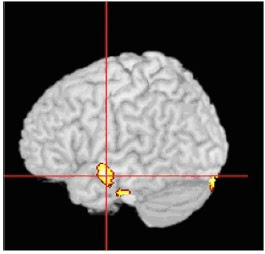 Perhaps this is a phonological representation of some sort (the phonological "store"!) that is getting more stable with learning. This might be the most interesting part of the study.

What I really didn't like was the discussion. First they claim to have localized the functional anatomy of the "phonological word-form learning device". I think rather that they've (re)localized a circuit that supports phonological short-term memory (but is not dedicated to this function). Then they suggest that the left temporo-parietal junction and Broca's region is "associated with the auditory lexicon" citing an important but now aging study by Howard et al. (1992). This position is oblivious to the fact that damage to these structures does not impair auditory comprehension (Hickok & Poeppel, 2000, 2004, 2007) which would be expected if this is where the "auditory lexicon" lives.

"Lateralization of the neural substrates for phonology and for vocabulary acquisition must be important factors to determine hemisphere superiority for language" (p. 1376).

It becomes clear in the next sentence that they are not just talking about phonological processes in production.

Given that the right hemisphere has some lexical competence (Zaidel, 1986), it remains to be established how the relevant neural representations are formed in this side of the brain.

The only thing I can say here is that someone dropped the ball in the lit review department as there has been relevant research published on this topic since the late 80s/early 90s.

I'm not going to defend an out-of-date literature review... However, to me it is an interesting finding that the phonological short term memory system responds in a way that reflects initial learning of new words. After all, there's an extensive behavioral literature that links pSTM capacity and vocabulary acquisition:

Baddeley, A., Gathercole, S., & Papagno, C. (1998). The phonological loop as a language learning device. Psychol Rev, 105(1), 158-173.My view, though, is that phonological short term memory and short term learning of novel words depends on a system that is functionally separate from systems that store words in the longer term. For some recent evidence along these lines, see the following (shameless self-promotion):

Hi Matt,
Trust me, I believe -- in large part *because* of the Baddeley et al. work -- that the phonological STM system (i.e., the sensory-motor interface) is involved in learning novel words and I wanted the Paulesu et al. study to provide a solid demonstration of this, linking this effect specifically to Spt. But even though they found what I expected, I don't think they did it convincingly.

For example, we have done several studies now that present novel words to subjects during scanning and we ask then to rehearse these words. In some variants we ask subjects to perform a serial order recognition test. During both the listen and rehearse phases of the task we find activation in Spt, Broca's area, etc. This is a fairly standard "phonological STM" paradigm and if I tried to argue from these data that I had identified a network for word learning (hey, the subject did end up learning some of these nonwords!), you'd say, "how do you know the activity reflects learning and not just phonological rehearsal" -- and you'd be correct.

Well this is essentially what Paulesu et al. did. They presented nonwords, asked subjects to repeat them at the conclusion of the scan (very likely inducing rehearsal during the scan), and found that the phonological STM circuit was activated. Yes, they did repeat the same list every scan (twice), and yes, they did demonstrate that learning took place. But, (i) they didn't correlate learning directly with brain activity, and (ii) they report that activity in the fronto-Spt circuit was not modulated by repeated exposure to the same list unlike the STS site. So, to adopt a skeptic's view, I might say that all they've mapped is the phonological STM circuit via what is effectively a phonological STM task. Too bad. I'll highlight what I believe is a much better demonstration of Spt's involvement in novel word learning in a subsequent post.

Thank you Matt for the link to your paper. It looks really interesting. And please, always feel free to shamelessly self-promote (that's what we do!). I wish more people would tell us what their up to. How about a summary of what you did and what you found? We can post it as a guest entry...