Tania Pasternak from Rochester visited the Center for Cognitive Neuroscience here at UC Irvine as part of our colloquium series, and presented some interesting data on prefrontal cortex responses in a visual motion discrimination task. One finding is relevant to language work: 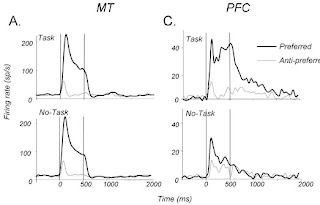 or just passively views the stimulus, the selectively disappears (bottom right panel). Thus, stimulus specific responses are task dependent in PFC. MT direction selectivity is independent of task, however. MT neurons respond to a moving stimulus in their preferred direction whether the monkey is performing a direction discrimination task or just passively fixating (bottom left panel).

So what's the connection to language research? The connection is the observation of task-dependent involvement of frontal cortex in a putatively "sensory" ability. Ask aphasics with frontal lesions to discriminate pairs of syllables and chances are they will be impaired. Ask healthy participants to discriminate syllables in an fMRI experiment and chances are you'll find frontal activation. We have argued this is because the task (discrimination), not the sensory processing, induces frontal lobe involvement (see Hickok & Poeppel, 2000, 2004, 2007 for review). Pasternak's data validates this claim: frontal lobe involvement in putatively sensory abilities, is task dependent.