We started Talking Brains as an experiment to see if blogging is actually a useful way to communicate in the scientific community. Two things have surprised me over the last 6+ months. 1. People read blogs, including this one which received 1400 visits last month. This is not much compared to the big boys -- I learned that some Scientific American blogs have a million or so visits a month -- but 1400 is not bad considering the size of our field. 2. People don't interact much on blogs, at least this one. I had hopped initially that this would be a discussion forum. But it hasn't turned out that way except in the few instances. So is it useful? Hard to tell since no one comments. :-) Hopefully, some of the ideas and commentary we've put up here has stimulated research. If so, then it's probably worth it.

If anyone has any ideas on how to get more interaction, please let us know. 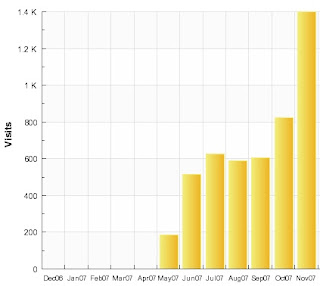 Many thanks for the blog--It is indeed a useful joy to read (I especially enjoyed the Top10 lists). What a great idea to introduce a hit-and-run way of scientific communication as a counterpoint to inert standards.
Maybe discussing in the disorderly commentary pop-ups is not very stimulating, but I'm sure as soon as a discussion kicked off, it'll stay in the flow.
Best wishes from London.

I read almost exclusively through RSS feeds. I'm not sure how this affects the numbers.

Oh--
I know a new question for the survey or for a possible discussion.
What do you guys think of the new Biolinguistics journal and its first issue? I'd love to read the experts' opinions.

The Biolinguistics journal looks interesting for sure. But we are hardly the experts in THAT all-star crowd (check the editorial board). Those are the folks who are doing all the heavy lifting in language science. We're just trying to figure out which lobe(s) all this machinery lives in! ;-) It was nice to see that my new colleague Jon Sprouse has an article in the inaugural issue. BTW, Jon's approach to syntax is highly amenable to neurophysiological studies. Check it out!

Dave Dobbs here, editor of the Mind Matters blog at Scientific American. I do much headscratching myself over what blogs accomplish and how hits, reads, etc. relate to actual thought provoked or comments inspired. I'm far from figuring it out. Yet from editing Mind Matters for a year I know a couple things:

1. A lot of people read, are affected, but don't bother telling you unless they run into you personally.

2. The most-read entries don't necessarily draw the most comments. We've seen this starkly at Mind Matters, where top hits sometimes draw only a couple comments (and less-trafficked ones generate lots of comments); I've seen it too in my writing for magazines, where sometimes the most heavily linked or emailed stories generate few or no letters-to-editor. Sometimes the deep hits stay inside.

In any event, glad to hear your hits are up and hope the utility and influence rises likewise.

Thanks Dave (Dobbs) for your comments. I wouldn't have predicted the possible inverse relation between hits and comments.