The problem with group studies in fMRI

You miss things. For example, in our first fMRI experiments designed to identify an auditory-motor integration circuit, we kept seeing, in individual subjects, a region at the back of the Sylvian fissure on the left that was highly activated both during listening to and covert production of speech. This region, now called Spt, did NOT show up in a group analysis of the same data. It appears that the variability in anatomy across subjects, coupled with the fairly focal activation, washed out the effect in a group analysis.

We've recently been looking through a new fMRI dataset and found another, but related, problem with group level analyses. The study involves a short term memory task: stim set #1 --> maintenance period --> stim set #2 --> subject judges whether the lists are the same or not. Participants are bilingual in English and American Sign Language, so the primary manipulation is STM for speech vs. sign. In group data we found a region in the posterior STS that responded to sensory stimulation in either modality (speech or sign) AND showed a maintenance response. Interesting, but that's not the point of this entry. We did a subsequent analysis of this region in individual subjects and examined the resulting timecourses as revealed by the group analysis compared to the individual subject analysis. What we found was that the amplitude of the response in the group analysis in the ROI was ab 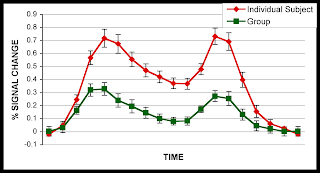 out half of the amplitude in the individual subject analysis (see graph, which shows the response for the speech condition only). This makes sense, of course, because in a group analysis the peak of the activation in an ROI in a given subject will vary somewhat, so when you look at the average timecourse in a group-determined ROI you end up with a diluted average. In individual subject analysis, however, you can identify the peak of the activation in each subject thus getting a less diluted average across subjects. For large activations this may not matter, but for more focal activations it can either completely wash out an effect, as we found previously, or make it look minimal, as in this case. For example, if I pointed at the green curve in the graph above and told you there is a robust maintenance response (the region between the peaks compared to the baseline at the start and end points of the curve), you might not buy it. However, the maintenance response is quite apparent in the red curve.

So go ahead and continue with your groups studies, but be aware, if you are looking for a relatively focal activation, you just might miss it.
Posted by Greg Hickok at 2:08 PM