The following is a guest post from Heather Dial and Randi Martin. I (Greg) have provided my comments on their post interspersed in italics and set off by "++++" symbols.

“auditory related cortical fields in the posterior half of the superior temporal lobe, bilaterally, constitute the primary substrate for constructing sound-based representations of speech. From this point, however, we will argue that there are at least two distinct pathways that participate in speech perception in a task-dependent manner”

We deal with this issue in more depth in Hickok & Poeppel 2004 as well as the issue of speech-specificity.  Regarding the latter, we have always taken a rather agnostic position, arguing that specificity is for the most part an independent question in mapping the neurocomputational steps from sound to meaning or sound to articulation.  In short, we (or at least I) do not subscribe to the view that specificity is a prerequisite for identifying a linguistic level of processing, which undermines DM's point. Here is the relevant paragraph from our 2004 paper (p. 69): 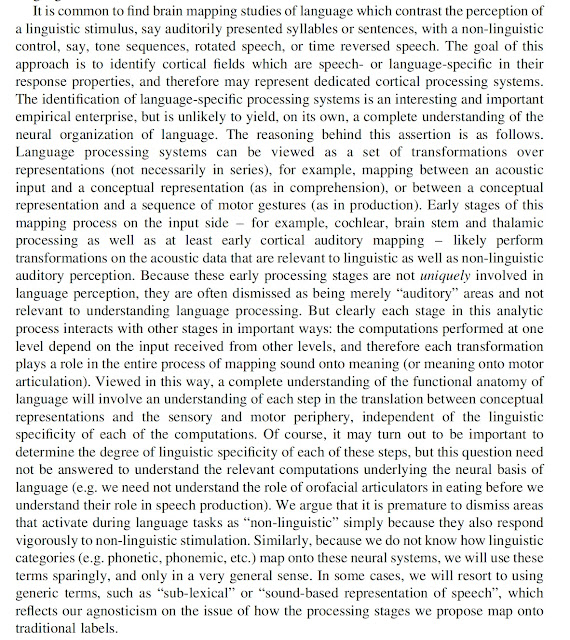 Yet another perspective seems to come from the Vaden, Piquado, & Hickok (2011) paper, that Hickok references in the blog.  Vaden et al. state on p. 2665, “The current study aimed to functionally identify sublexical phonological activity during spoken word recognition.”  This was done by examining the brain regions sensitive to phonotactic frequency in spoken word recognition. They found that this manipulation modulated activity in Broca’s area and not in superior temporal lobe regions. They conclude on p. 2672, “This finding… is more consistent with speech perception models in which segmental information is not explicitly accessed during word recognition.” We had interpreted this perhaps too broadly as implying that sublexical processing in general is not explicitly accessed, though as Hickok notes, it is possible that sublexical units other than phonemes might necessarily be involved (e.g., syllables) in word recognition.  However, such a possibility appears yet to be tested in a fashion to distinguish segmental and syllable-level representations.  It should be emphasized, however, that other researchers have found that activation in the superior temporal lobe does respond to sublexical manipulations (see Dial & Martin, p. 205).

We wish to reiterate that if the dual route model’s claim is that the phonological network instantiates a sublexical processing level, then our findings are wholly compatible with this claim. If the current debate serves to clarify the issue of what phonological processes are argued to be shared prior to divergence into the two streams, then that will be a step forward.

“the use of sublexical tasks would seem to be a logical choice for assessing these sublexical processes, except for the empirical observation that speech perception and speech recognition doubly dissociate.”

However, we would argue that tasks like syllable discrimination are valid assessments of sublexical processing that can be highly predictive of lexical processing. The behavioral double dissociations that Hickok and Poeppel refer to have most often been derived from studies in which the perceptual discriminations required in the sublexical tasks were much more difficult than those in the lexical tasks (e.g., single distinctive features in the sublexical discrimination task, and no phonological overlap with distractors in a picture-word matching task, as in the WAB word recognition subtest).

GH: "most often" is a fair statement but one that ignores the fact that not all of the studies showing this dissociation were unmatched.  In our 2004 paper we leaned heavily on one study in particular (Miceli, et al, 1980) that used a picture-word matching task with both semantic and phonemic distractors. It is because this study used a phonemically better matched comprehension test that we reproduced the data in Table 1 in Hickok & Poeppel 2004 to make the point.  Although we didn't cite it in our review papers, I would also point you to Bishop et al. who found task effects in closely matched discrimination versus lexical status tasks.  See this blog post.
++++++++++++++++++++++++++++++++++++++++++++++++++

When sublexical and lexical tasks are matched in the required discriminations, then performance on the two is highly related (e.g., our correlation between syllable discrimination and word discrimination for matched stimuli was .96).

We did find, however, as pointed out in this blog post, that even though performance on picture-word matching and syllable discrimination were highly correlated (r=.86), 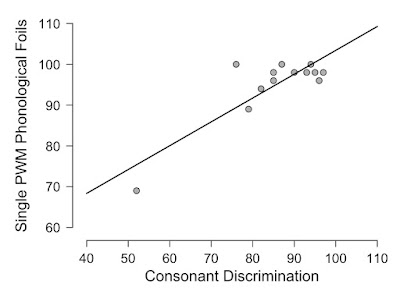 An outlier is apparent, which happens to be the only Wernicke's patient in the sample, i.e., the case where we would expect the most severe auditory comprehension deficit. Furthermore, this case had bilateral lesions involving the superior temporal lobe!  According to the dual stream model, we would expect a significant generalized speech perception deficit. It is no surprise at all, then, that this case was poor on both syllable discrimination and single word auditory comprehension.  If we remove this case from the analysis, the correlation between discrimination and comprehension disappears (r = 0.349, p = 0.266; BF = 0.62): 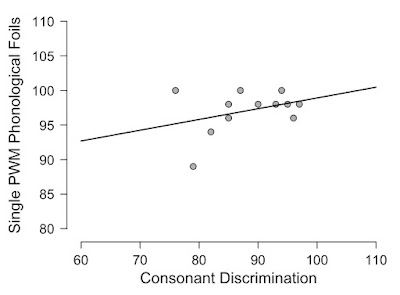