Speech perception when the motor system is compromised

Stephen Wilson's recent comment in TICS provides a nice jumping off point for considering the strongest evidence favoring a role for the motor system in speech perception. By the way, Stephen is a friend and former post doc of mine and someone whose work I respect a great deal. Given how short the published letters are in TICS we had talked about continuing the discussion here. So here we go...

Let's start with this statement in Stephen's letter held up as one piece of evidence for the role of the motor system in speech perception. He cites the study by Baker et al. 1981 and concludes:

Broca's aphasics performed worse at discriminating place of articulation than voicing, and made more errors when forced to rely on just one phonetic feature than on two. 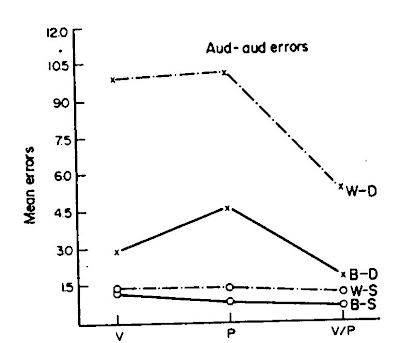 Note worse performance by Broca's patients for the middle point (place contrasts) in the different trials compared to the left or right points. Note also two other things:

(i) The Wernicke patients are doing worse than the Broca's. This suggests that damage to auditory-related areas interferes with speech perception more than damage to motor-related areas. (Stephen isn't arguing that motor cortex is more important than auditory, but I want to point this fact out nonetheless.)

(ii) Take a close look at the y-axis scale. It goes from 1.5 to 12.0 (yes there's a decimal in there!). This is mean error rate on a test that involves 40 trials in each condition. So considering only the place condition where Broca's patients perform most poorly, we are looking at an estimated overall percent correct on the discrimination task of 86% (Wernicke's = 71%). 86% isn't horrible, but it is not at ceiling either. HOWEVER, percent correct is the WRONG measure because it includes both the ability of the subject to discriminate the two speech sounds AND any response bias the subject may have (e.g., a tendency to say "same"). In this context, it is not inconsequential that frontal regions such as Broca's area has been implicated in response selection! Luckily there are well-developed signal detection methods for removing response bias, for example a-prime and d-prime. Given the way Baker et al. graphed their data separated into same and different trials, we can calculate false alarm and hit rates (eyeballed from the graph and converted appropriately) and from this calculate a-prime and d-prime (I used a look up table in Macmillan & Creelman (1991 Detection theory: a user's guide. Cambridge) for the latter. A-prime, which is an estimate of area (proportion) under the ROC curve for Broca's = .965 and for Wernicke's = .919. This is good performance! D-prime is even more impressive with Broca's pulling down a healthy 4.8 and Wernicke's a reduced but still impressive 3.81. How do you make sense of these numbers? Think of them as z-scores where 0=chance performance, 1.0 is threshold discrimination, and integer units are roughly equal to standard deviations. Considered in this way, we can say that Broca's are discriminating minimal pair place features at 4.8 standard deviations above chance and 3.8 standard deviations above threshold. That is killer good discrimination! Are Broca's worse than controls? It wasn't tested so we don't know.

Overall, it is very hard to conclude that Broca's patients have any deficit at all in discriminating speech sounds based on the Baker et al. study. If anything, the study demonstrates the superb ability of such patients to perceive and discriminate even fine phonetic contrasts.

I'm guessing that you guys would be interested in this paper, if you haven't seen it yet...

Just printed it out five minutes ago. Haven't read it yet. What's everyone think? Is the motor theory now correct?

Hey Greg, my main point with bringing the Baker (1981) study is that not the magnitude of the deficit, but the nature of it. The patients seem to have done worse when only one feature was varied than when two were varied. If this is true empirically (and I grant, this finding needs to be replicated), then it would argue for a perceptual locus to at least some of the errors. Because the other kinds of factors you've proposed (e.g. metalinguistic processes, etc.) should affect all conditions equally.