A forthcoming paper in Frontiers in Evolutionary Neuroscience by Dean Falk shows that Albert Einstein's brain had some rare anatomical anomalies involving language-related sensory-motor areas, regions I consider to be part of the auditory "dorsal stream" -- or more accurately, the vocal-tract sensory-motor integration circuit (Hickok & Poeppel, 2007; Pa & Hickok, 2008). Falk suggests that these anomalies may be related to Einstein's reported delay in language development as well as to his self-reported tendency to use visual imagery over audio-verbal imagery.

Falk analyzed gross anatomical features of Einstein's brain from photographs. He reported atypicalities in the pre- and post-central gyrus region, but most striking to my eye is the tangled mess of Einstein's posterior Sylvian region. His post central sulcus (Pti) extends into the Sylvian fissure at which point the Sylvian seems to just end. It would seem that this arrangement destroys the typical configuration of the planum temporale, parietal operculum, and the entire supramarginal gyrus. 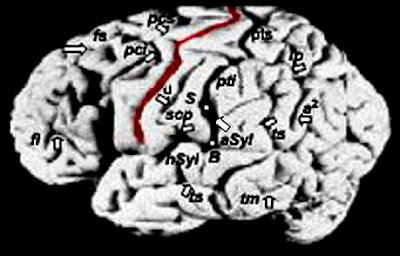 In fact, Falk suggest that Einstein's BA40 (the supramarginal gyrus) is split into two parts as indicated on the rendering from Falk's paper where A is the typical arrangement and B is Einstein's.

It is not clear at all where sensory-motor area Spt (Hickok et al. 2009) might be in this pattern. We have suggested that area Spt, as part of a sensory-motor integration circuit, is critical for speech development (Hickok & Poeppel, 2007), but there is little direct evidence on this point. I'm not sure I would count Einstein's anomalies in this region and associated language delay as evidence, but it is an interesting observation.

The anomalous dorsal stream configuration may very well lie at the basis of Einstein's very heavy German accent (he was a lousy L2 learner, as the available audio recordings of him show compellingly) -- while at the same time accounting for the 'added' space and configuration available to parietal and temporo-parietal areas that are the hypothesized substrate of "the number sense" a la Stanislas Dehaene.

Organology and "endophenotype phrenology" at their finest. The dorsal stream- second language phonology link may not be all that dorky, of course ....

Yeah, the L2 link to the dorsal stream is an important observation and one we don't mention much. Given your L2 acquisition capacity David, I think we should scan you in our next Spt study...

Nice One... I enjoyed reading it.