On Monday's broadcast Bob Edwards interviewed Oliver Sacks (probably a well-known figure to TalkingBrains readers). Sacks has a new book out, Musicophilia, and on the show he speculated that musical rhythm, like language, is species specific and species uniform (also a well-worn concept for TB readers). In the book Sacks cites several of Aniruddh Patel's publications and concludes that language and music arose separately in humans. There's a clip from the interview (it's just under two minutes long):

[I need to figure out how to insert an audio file here -- blogger supports videos of various types but not this audio ... more on that soon. David]

The relevant passage of the new book is on pages 242-244, starting out, "[t]he fact that 'rhythm' ... appears spontaneously in human children, but not in any other primate, forces one to reflect on its phylogenetic origins." Sacks goes on to quote Patel (2006), and they both suggest that "[m]usical rhythm, with its regular pulse ... is very unlike the irregular stressed syllables of speech."

This view of rhythm seems somewhat naïve, both as ethnomusicology (what about polyrhythms?) and as linguistic typology (what about syllable-timed languages like French?, see Grabe and Low 2002). Talking Brains is trying to track some of this down, building on Luo and Poeppel (2007). Stay tuned.

Episodes of the Bob Edwards show are available at Audible.com 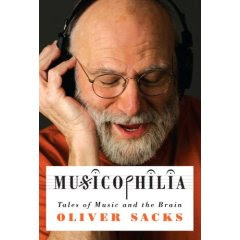 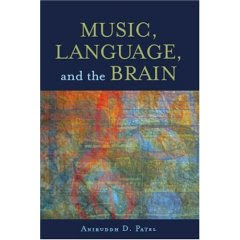