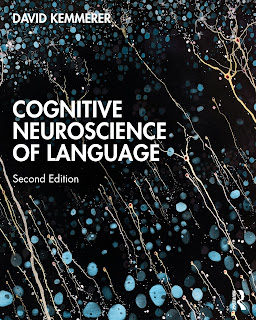 The 2nd edition of David Kemmerer's Cognitive Neuroscience of Language textbook is expected to appear in April or May, 2022.  If you use the code DKE20, you can get a 20% discount when you order the book from Psychology Press.

The preface is copied below.  It describes which aspects of the 1st edition have been retained, and which aspects of the 2nd edition are new.  In addition, note that an "eBook+" version will be available, as well as a website containing PowerPoint slides, test questions, and links to relevant videos.

Welcome to the second edition!  During the six years since the first one appeared, the branch of cognitive neuroscience that focuses on language has continued to flourish.  Countless new experiments have been conducted, several major theories have been refined, three large volumes of survey chapters have been published (Hickok & Small, 2015; Hagoort, 2019; de Zubicaray & Schiller, 2019), a brand new journal called Neurobiology of Language was recently introduced, and the Society for the Neurobiology of Language has significantly grown (www.neurolang.org).

My primary aim in preparing this second edition of the textbook was to keep pace with these advances in the field.  But I also wanted to preserve the general approach of the first edition, so the following features have been retained:

·       Broadly speaking, the book's purpose is to give students, teachers, researchers, and clinicians a solid, accessible overview of what is currently known about how our brains enable us to perceive and produce language.  More narrowly, it has been designed for use in courses offered to graduate students and upper-level undergraduate students.  Although much of the content is inherently challenging, no previous knowledge of either neuroscience or linguistics is required, since technical terms and important principles from both disciplines are explained along the way.

·       After covering background material about the human brain and aphasia syndromes in Parts I-II, almost all of the chapters in Parts III-VI draw upon prominent theoretical models that characterize particular linguistic domains at both cognitive and neurobiological levels of analysis.  In addition, these core chapters illustrate how the different components of the models are supported, and in some cases challenged, by experiments employing diverse brain mapping techniques.  A special effort has been made to describe many of these experiments in considerable detail, providing information about their goals, methods, results, and implications.  The rationale for such an in-depth approach is that it may help students understand not only how empirical studies are carried out, but also how they contribute to the dynamic interplay between theory and data.

At the same time, however, several aspects of this second edition are new and deserve to be highlighted here:

·       Following the lead of a 2016 paper by Pascale Tremblay and Anthony Steven Dick called "Broca and Wernicke are dead, or moving past the classic model of language neurobiology," minimal use is made of the traditional terms "Broca's area" and "Wernicke's area" because it is now abundantly clear that they are not only obsolete but confusing.  Instead, more precise anatomical terms are used when necessary.  This point is elaborated near the end of Chapter 1.

·       To capture some of the most salient developments in the field during the past six years, all of the chapters from the first edition have been revised and updated.  Some of them, however, have been modified much more than others.  The ones that have undergone the greatest changes are as follows:  Chapter 5 ("Speech perception"); Chapter 6 ("Speech production"); Chapter 8 ("Object nouns"); Chapter 9 ("Action verbs"); Chapter 10 ("Abstract words"); Chapter 13 ("Sentence comprehension"); Chapter 14 ("Discourse"); and Chapter 15 ("Reading and writing").

·       Because research on the neural substrates of bilingualism has been rapidly accelerating, and because students are often quite interested in this topic, a separate chapter is now devoted to it—namely, Chapter 17 ("The bilingual brain").

·       The table of contents has been reorganized in such a way that the chapters on reading/writing and sign language are now in Part VI ("Other topics") toward the end of the book, together with the chapter on bilingualism.  Each of these chapters, however, can be read on its own, independently from the other chapters in the book.