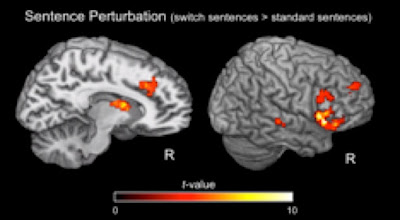 Hi William - interesting thoughts. I'm not on very firm ground here, but the right hemisphere also shows up reliably in word production tasks (e.g. Indefrey&Levelt, Cognition 2004), and more in picture naming than in word generation (I&L figure 4). If I remember correctly, structural and functional differences between stutterers and normal speakers have been found bilaterally. I would therefore like to propose adding "Self-monitoring" to your list of possible contributions of the right hemisphere. It's my impression that you see the RH less in single-word comprehension compared to sentence comprehension tasks, and the latter may involve more production and self-monitoring. However, there are a couple of fMRI studies by Bozic&Marslen-Wilson that argue RIFG is involved in semantic processing of morphologically complex words in isolation.
With respect to your Frontiers paper, I'm not sure whether I am reviewer A or B, but the problems I had were 1) your results for structure and complexity were not very strong, and didn't replicate previous results, 2) you did not show "similarity of your activation to the stopping literature", you actually replicated the stopping literature. You did not show overlap between activation in a somewhat natural sentence production tasks with activation in a stop-signal tasks, your task explicitly required subject to interrupt ongoing processing. I'm therefore not convinced that your results tell us something about the role of the RH in sentence processing.

Reviewer B is a hypothetical reviewer; I appreciated your detailed comments very much! And thanks for chiming in here, too.

Our results did confirm that stopping applies not just to hand/finger actions but also to speech production. I agree though that our results alone do not point toward an understanding of the right hemisphere in sentence processing. Rather, the fact that we obtained robust right IFG activation pointed our noses toward the interesting overlap between right IFG activation for particular kinds of sentence comprehension experiments and the stopping experiments. Just as people have observed overlap between sentence comprehension and working memory or cognitive control tasks in left IFG, we're doing the same with the right IFG.

I think the word production/picture naming data you point to is very interesting and quite relevant. I suppose the question is what the mechanisms involved in self-monitoring are - wouldn't "stopping" or inhibition be a core part of self-monitoring, or a downstream consequence of self-monitoring? I can imagine that a huge problem in stuttering is that there is an overactive inhibition mechanism that prevents fluid production.

Just glancing over Indefrey & Levelt 2004, I notice that left IFG is active for both picture naming and word generation, but right IFG is only active for picture naming. I don't know the details of particular tasks used in each experiment, but I think there are interesting differences between these tasks that may isolate an inhibition mechanism. Picture naming requires precise selection of the target word - competitors have to be suppressed. Word generation is kind of free-form - all words that come to mind are valid. So if the left=go you'd expect it to be active for both tasks; if right=stop you'd expect it only to be active for picture naming.